Hidden deep in the forests of central Mozambique, tourism beckons for struggling communities in the Chimanimani Forest Reserve. Local NGO, MICAIA, is working on this and other sustainable livelihoods in the area.

The Chimanimani Forest Reserve entrance is marked by a 3 cornered stone planter, it has no name on it, and there is nothing else to tell us we are entering one of Mozambique’s most stunning natural attractions, let alone a road. We are venturing into part of the 120 hectare Moribane Forest Reserve, located in the buffer zone of the Chimanimai Transfrontier Conservation Area (CTCA) in Manica Province, central Mozambique.

Its March, the tale end of the rainy season, and the track leading to Mount Binga ‘Basecamp’ is a tough ride, even in a 4WD. Not even the park rangers can make this journey at the moment, which becomes clear when we come across a huge tree fall blocking the track. Getting around it involves swerving into the forest and negotiating our way through the trees. It doesn’t get any easier as the track drops down into rivers and over sheer rocky beds. This area of montane forest is pristine, home to crystal clear rivers, sandstone peaks and grassy valleys. After 2 hours of literally bouncing around in the landrover we finally arrive at the tiny community of Nhabawa.

On the road into Nhabawa

Nhabawa is home to around 300 inhabitants and sits in a spectacular clearing at the foot of the Chimaninami mountain range straddling the borders of Zimbabwe and Mozambique. The Chimanimani’s highest mountain, Mount Binga,’s  summit stretches above the forested slopes. Walk in either direction and you will reach waterfalls and caves full of ancient petroglyphs.

Despite the raw beauty and proximity to Mount Binga (2450m), tourism to the region is low volume. The legacy of a bloody 15-year civil war which killed an estimated 1 million people and displaced 5 million more is evident all over Mozambique. In 1992, at the end of the war, Mozambique was left with a pitiful number doctors and teachers, let alone schools, hospitals, and tourist infrastructure. Severe flooding in the immediate post war years delayed Mozambique’s attempts to rebuild itself further, but today it has the fastest growing economy in Southern Africa, with vast untapped reserves of natural resources and huge tourism potential.

Although coastal areas of Mozambique enjoy a successful tourism industry, sadly few people venture into central Mozambique. 2 hours away by road, the city of Chimoio has only 1 backpacker hostel and not a single souvenir shop. Aside from a steady stream of NGO workers, foreigners are still a rare commodity here. The Zimbabwean side of the 2500km2 CFCA is where most keen mountaineers have traditionally climbed Mount Binga from, but with local NGO MICAIA’s help, the dream of tourism here could become a reality.

MICAIA, created and directed by husband and wife team Andrew and Milagre, aims to empower rural communities to “take action to change their lives for the better”. MICAIA achieves this through carefully planned projects in agriculture, natural product enterprises such as honey, eco-tourism, conservation and youth employment projects.

Despite its recent growth, 50% of Mozambique’s population still lives in poverty, rising to 75% in rural areas. In this area, agricultural productivity is low and unemployment is high, often resulting in the men being forced to migrate to cities to work.

Inside the Zomba forest life is simple

My organisation’s miniscule contribution is sending groups of young people to trek the Mount Binga trail and assist with much needed school construction projects. In 2012 we sent one of our most experienced mountain leaders to train local people from the village as guides and porters. 8 of our groups trekked the beautiful trail and created the first regular income from tourism in July and August that year. On entering the village today Andrew gasps as he notices a splattering of zinc -sheeted rooves in the community which were not there last year. Being the owner of a zinc roof is a sign of wealth in these parts.

As we gather at the’ Basecamp’ (an area for tents and a hut with long drops) for a meeting with the guides from the village, they begin to explain how their lives have been changed by having an income from tourism just for 2 months of last year. Women who had been trained as porters continue. “The money I got from being a porter meant I could buy food and clothes for my children, it made me so happy,” says one lady. With a huge grin spreading from ear to ear, the chief of the community gushes how he has bought his first mobile phone, and proudly gives Andrew his number. He is the first person in the area to have such a thing. What the community members earned in those few weeks would probably only represent a month’s salary in the city of Chimoio, but here their smiles and Andrew’s surprise tells me it was worth a lot more. A community who struggle by on subsistence farming suddenly had just a small amount of disposable income.

Beyond ‘Basecamp’, I hear children’s voices chanting. I look behind me and in the clearing I see children learning under an open sided frame with a zinc roof. This was the beginnings of a classroom which our groups built, and which I was planning they would finish the following year. As I make my way over, 30 pairs of fearful eyes stare back at me. I show them the video I have taken of their lesson and they convulse in laughter. It’s a beautiful scene with the forest and the mountains in the background, and its easy to forget that this “Regulado” (the administrative area which comprises 4 villages of which Nhabawa is the centre) has a population of 1200 but no clinic, public transport and barely a road in. 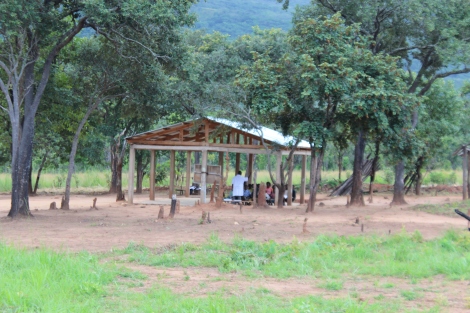 The following day Andrew takes me to the Zomba Forest Reserve, the other side of the Moribane Forest in the Sussendenga District. The only way in is to walk. We park at the road head and pick up a couple of local guides before setting off on foot through the tall grasslands. A quick canoe river crossing and we are deep in the forest again. Being on foot means I can really appreciate the colourful flora and fauna. Tropical bird calls abound, and I discover that the forest reserve is one of the most biodiverse in southern Africa, home to elegant ferns, aloes, and orchids amongst many. Andrew explains that MICAIA are currently working with Kew Gardens to investigate just how many endemic species thrive here. Eventually we arrive at a clearing where there are a few palm thatch huts and some raised branches on the floor with a blackboard in front of them. “This is Zomba school,” explains Andrew. Its hard to imagine how this can function as a school: 2 of the 3 thatched gazebo structures have very little roof left and the 4th ‘classroom’ is purely outdoors. “School has to stop in the rainy season”, explains one of the teachers, “but the main problem is that there is no school after grade 5, so the children cannot start secondary school because they can’t access grades 6 or 7.” It would be a 16km walk to the nearest school offering grade 6. If we can help the community build a permanent weather proof classroom here, the village would attract more government funds and teachers, ultimately allowing the school to offer grade 6.

That night we stay at Manica province’s only community eco-tourism initiative: Ndzou camp. An initiative aimed at conserving the multitude of rare species which call this forest home, the camp was constructed as a joint venture between the local Mpunga community association, MICAIA and the World Bank in 2009-10. This project is the only one of its kind in Mozambique. The conception, construction, recruitment and training of staff has all been conducted by MICAIA. It’s one of the few true ‘eco-lodges’ I have ever stayed in, run entirely on solar energy and with a mission to educate every tourist who stays here about the conservation of this precious area. Ndzou means “elephant” in the local language and one of the major draw cards is the small population of elephants who live in this part of the forest. Guided elephant tracking walks take place at dawn and offer tourists that magical moment of coming across these majestic creatures in their natural habitat. These local guides grew up in a world where elephants were a daily reality, and have all been trained by nearby Gorongosa safari park’s specialist rangers. The very existence of this camp is ensuring the coexistence of the population, the reserve and the elephants will continue; the camp funds elephant patrols and similar protective initiatives. The camp consists of comfortable but rustic Rondavels, a few permanent tents, camping space and a restaurant and offers various activities such as elephant tracking safaris. The staff are all from the local village of Mpunga which has clearly benefited from this project.

I leave this part of Mozambique feeling both moved and inspired. Undoubtedly in one of the most unspoiled parts of the country, Nhabawa, Zomba, Ndzou and MICAIA have so much to teach us about empowering communities to participate in their own development, and I hope that in the coming years World Challenge can have a small part in this.