Maxixie to Chimoio: An experience of public transport in Mozambique.

There are no actual bus stops or timetables for buses to Chimoio according to the several people I have asked. One simply waits on the right road hoping a bus going in your direction will stop here. And so I wait, on edge of the small town of Maxixe, under the burning hot southern Mozambican sun. My mission is to recce a bus journey north to assess its suitability for our school groups. Finally, around the corner trundles a 1970s bus and all the people milling around suddenly start to get excited. One by one we stumble onto the bus which had been already nearly full on arrival.

There isn’t a spare inch of seat, 3 people squeeze themselves onto 2 seats, people stand in the aisles and I am wedged between a heavily pregnant women and an oddly talkative man. Luggage racks, either above or beneath the bus, appear to be missing, hence bags and boxes are stowed wherever there is an inch of space. The bus door is another absent feature, though obviously not felt to be a significant loss. We turn onto the main road and although the bus is not capable of great speed, the windows are rattling so hard they are actually falling out of their frames.

We pass through swathes of palm trees and then forested bush land. Roadside hawkers sit by the road selling their wares. For miles there is nothing but chairs balanced on sticks at the edge of the road, which apparently indicates people selling diesel. After a while this changes to bags of cashew nuts attached to tree branches, and at one point there are only people sitting next to rows of huge bags of coal. Whole families walk between towns at some points on the main road, carrying baskets on their heads. The only vehicle we pass for miles is a cattle cart pulling what looks like milk vats. The 2 boys who are driving it look no more than 14.

Inside the bus it’s sticky and hot. I am trying to hold a protracted conversation with talkative man and pregnant woman but struggling with my own particular version of Spanish-Portuguese. A friendly Zimbabwean sitting on the other side of talkative man chips in with some English and helps me out, little do I realise that later that night he will be a blessing. The journey settles into a rhythmic pattern; we speed up between towns where there are no other vehicles and then we slow down to pass through each roadside community, mostly with “Vodacom” painted across its simple red breeze block buildings. Sometimes we pass a town where buildings have been left derelict. Remnants of the civil war which ravaged this country for 15 years still survive: window-less and door-less shells remain, on other buildings the doors are still splattered with bullet holes or have trees eerily creeping through their ruined rooves. Often the road dips down into a valley and you can see miles and miles of empty road ahead.

Before I know it 4 hours have passed and we have barely seen another vehicle, this is the main highway north! When a bus passes the other way you can feel the anticipation. Daylight starts to fade and the road seems to get increasingly more bumpy. The bus sways violently from side to side and it feels like every last bolt is creaking as more people pile on at each ‘stop’. We are sitting knee-to-knee and toe-to-toe. 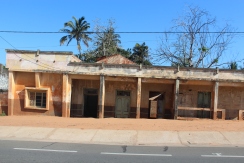 For some reason the bus driver decides to stop in the middle of nowhere in the dark. I wonder why we have stopped until I notice men walking off into the bush-land at the side of the road. I make my way out into the dark, humid night. There are no lights and no sounds except for the people chatting and the crickets. I notice that the women have started to congregate at the back of the bus and are squatting. They are all wearing layers of long skirts, whereas I am wearing trousers. I want to ask them if it’s ok if I squat too, but I don’t have the words.

Back on the bus I realise its 8 hours since we set off. We must be nearly there I think, since the journey to the city of Chimoio was supposed to be 8 hours. Torchlight, my map and a mix of English, Spanish and Portuguese clarifies the situation: we are still far from Chimoio.

It’s nearly midnight when the bus stops at the junction of Inchope, a mere 45 minutes from Chimoio. I get off and wait in the darkness. After about half an hour I am still waiting. Some people appear to be lying down on the road. I have no clue what’s going on. The bus conductor suddenly gets back on the bus and switches all the lights off. Still I don’t click. I ask Mr Zimbabwe what’s happening and he explains that the driver is tired so he has decided to stop here for 4 hours where he, and the rest of the bus, will sleep. So here we are, just 45 minutes from a city, at a roadside with no way to get to the city until 5am the next morning. Back on the bus the stench of vomit and urine is overwhelming. I navigate my way through the tangled limbs of people sleeping back to my seat, where heavily pregnant lady is stretched out and snoring. Outside on the road lots of people are now curled with their belongings asleep. There is no complaining, no arguing and it would appear very little surprise at the driver’s decision.

I contemplate my options: curling up on the edge of the road with 2 cameras, 3 mobile phones, a laptop and $700 in cash isn’t a great option. I notice by torchlight there is a wall a few metres away with a bed drawn on it. An emergency call to Andrew, my agent, who provides both geographical knowledge and linguistic aid, and I am told there is a hotel nearby where I can stay. As it turns out “Hotel” was a rather euphemistic term. There was no running water and an open fire pit with rooms arranged around a courtyard. It was easy to tell that this was also a brothel but I was pretty tired by then and just the sight of a bed was enough for me.

On waking the next morning and walking outside it strikes me how different things look in daylight. Where the bus had stopped was literally a lay-by with a few food stalls and a couple of hotels/brothels. It had been an interesting journey and a fantastic insight into the real Mozambique, but perhaps not one it would be safe for a group of British teenagers to embark on!

I took a local bus from Maxixie to Chimoio, however, larger coach style buses do operate along the EN1 highway. There is currently a road block on the EN1 at Save, therefore some of these buses do not operate this route currently.

TCO Turismo were running the best quality coaches up and down Mozambique until the troubles and road blocks. Check if they are now running at http://www.grupotco.co/

Luciano Coach is a coach company operating from Maputo north (and also Maputo to Durban). Coaches run from Rua Do Telegrafo in Maputo on Tuesdays and Fridays at 6.30am.

Intercape also run the main routes but at the time of going to press had suspended all routes north of Maputo due to unrest in Sofala province.