Almost 90 years ago it Inspired Gerald Durrell’s “My family and other animals”, and in many areas, Corfu’s natural beauty and charm has remained intact despite the invasion of tourism. You can still happen across the unspoiled corners which inspired Durrell and with its wooded mountainous interior, irresistible bays and olive groves, Corfu provides a great balance of culture, fun, and relaxation even with   little’uns in tow.

Here are a few reasons your kids will love the greenest of the Greek Islands:

Culture. The warm, slow paced Mediterranean culture both embraces children and provides a tiny taste of something different for them. Taverna owners welcome children and shower them with attention. One day Baby decided to waddle off by herself whilst we were ordering ice creams in a café at Agni Bay. I found her at the back of next door Nicolas Taverna surrounded by family members playing with her as she lapped up their attention. Although this region has earned its money from tourism for many years, somehow the traditional culture is not quite lost and in fact, the Greeks here seem to have perfected the art of marrying tourism with cultural heritage. Greek Night at Nikolas  Taverna was something of a highlight for our children. They astonished us by trying some of the Greek mezze starters and then became transfixed by Greek dancers. When the plate throwing began they could hardly believe it and asked: “can we do this at our villa?” Audience participation was of course welcomed and we all got the chance to hone our Greek folk dancing skills to the tune if the bouzouki. The highlight for Older Daughter though came as one of the dancers asked her to get up and dance with him. Off she trotted into the middle of the   Taverna to dance with the costumed threesome cheered on by the crowd. As we later congo’d out of the tavern (not strictly a Greek folk move I suspect) and onto the beach, the children marveled with delight at the star-studded sky and the surprise fireworks. 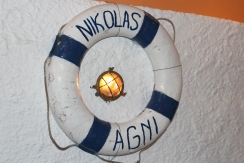 Nikolas Taverna has been around since 1972 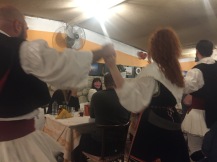 Beach hopping by boat. Hiring a boat in Corfu is infact easier than hiring a car and more akin to driving a moped than sailing. The kids loved chugging from one bay to another with the proud Dads as captains! 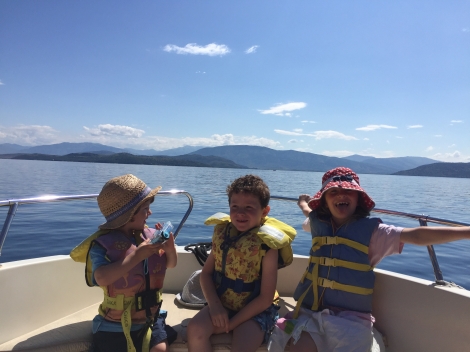 Boat hire companies are on most beaches and the beautiful northeastern coastline is littered with unspoiled bays to hop around. Many of the bays reachable by boat are almost deserted which adds to the Durrell feeling of exploration. Each of the coves has at least one  Taverna and a jetty. The Taverna owner will help you moor the boat and before handing you a menu. Traditional Greek food looking out over an exquisite bay whilst the kids swim and play with pebbles is one of Corfu’s greatest pleasures.

Short sails were interspersed by swimming in the lake-like waters, watching people jumping off rocky platforms and exploring sea caves, not to mention millionaire boat spotting. Underwater visibility here is easily as good as the Caribbean and the Maldives. Pretty shoals of fish surrounded us whilst we dipped into the ocean to snorkel in the turquoise waters and gave the kids their first experience of sea-swimming. A 9 person boat costs E90 for half a day and E120 for a day’s hire plus fuel. It comes complete with a demo and life jackets and doesn’t require any prior sailing experience.

Castles and Forts. Corfu’s strategic position means it has been captured and fortified several times over its long history. Founded by the Byzantines and added to by the Venetians in the early 15th century, the Old Fortress is set on a rocky peninsula and was originally separated from the island by a moat and 2 giant enclosure walls. Its chequered past includes seeing off 3 Ottoman sieges and being used by the Nazis to imprison Corian Jews before they were transported to death camps. Although much of what you see now is not original, it’s peak towers above the harbour area creating a focal point the town. Imaginations ran wild as we crossed over the bridge to reach the fort, clambered up the battlements and walked around the labyrinth of caves and tunnels. Great views of the Albanian and Greek mainland for the adults and a brilliant natural playground for the kids, complete with a café on the top. The only downside is that this is not particularly buggy friendly attraction. 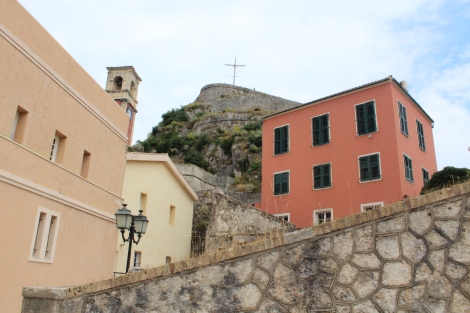 Corfu town, a UNESCO world heritage site, is something of an untalked about Dubrovnik: brimming with ornate Venetian facades, cobbled alleyways, Italianate squares, elegant palaces and Baroque churches. Despite being mobbed on a daily basis by cruise ship passengers, it manages to retain a real local charm: washing is strung from balconies and locals sit with their Greek coffees watching games of cricket unfold In Spianada square, the largest square in the Balkans. Almost all pedestrianized, kids will love running the maze of streets in the old town with an option of horse and cart rides. 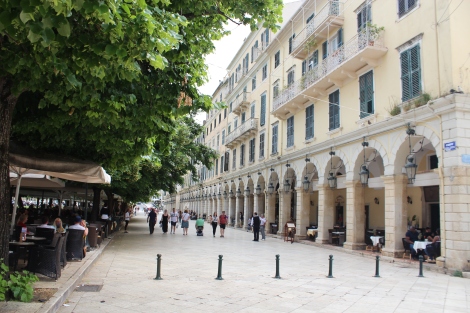 Day trips. Corfu has some great child-friendly day trips on offer. Uninhabited Vidos Island is only 10 minutes away by ferry and houses free roaming rabbits and peacocks as well as more great beaches. If on the other hand, you are after an exciting passport stamp, a short ferry ride away is the town of Saranda in Albania from where you can get to the Roman ruins at Butrint. For a different view, you can take a glass bottom boat called Kalypso Star from Corfu town and admire the Ionian marine life without even getting wet.

If boats aren’t your thing then meandering around the coastline or exploring the traditional mountainous villages inland is bound to appeal to the adventurous side of your kids. Many of the seaside Tavernas have pools which are free to use. A great place to spend a day is Barbati beach, a km long horse shoe shaped beach backed by forested hills and granite cliffs. One of the best beaches in Corfu, this is truly a kids paradise with a gently sloping entry to the sea, a heated pool and toddler pool, playground and leafy café/bar all right on the beach. There is even enough sand at the shoreline to squeeze in a sandcastle or two. The Nautilus pool/taverna complex is signposted on the main road just after  (or before) Barbati town. 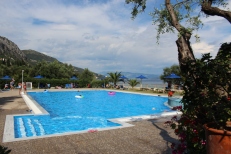 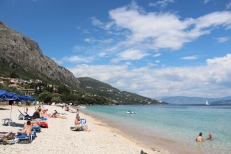 Villas with views. We spent our week in the glorious ‘Villa Amalthea’ located in the olive covered hills above Agni Bay. One Bay down the coast from Kalami, where the Durrells once lived, ‘Agni’ means unspoiled in Greek and this unassuming village lives up to its name. A  pebble beach lapped by flat, crystal clear waters, Agni Bay was adored by the kids. With a trio of seafront Tavernas, a bar, a few simple studios, and views of the Albanian coastline, the adults were pretty happy too.

Look back at the coast from any of the beaches and you will see pastel coloured villas dotted among the hills. Unsurprisingly a large proportion of our stay was spent gazing out to sea, one of the many pastimes which embody the laid back spirit of Corfu. 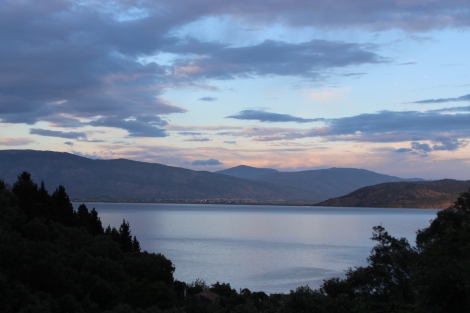 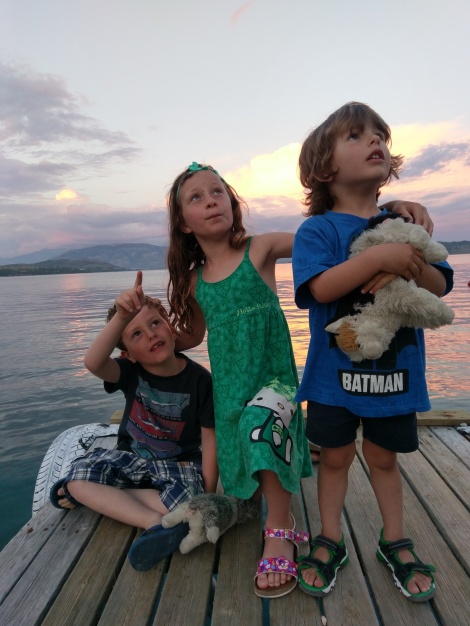