Landing at El Alto airport in La Paz, the world’s highest international airport, is a somewhat interesting experience. To start with, the descent is noticeably short. One minute the tips of mountains are all around you and the next you are touching down. High altitude airports need longer runways and El Alto’s is 4km long. This is apparently because the lower pressure at higher altitude means less air resistance to stop. We landed at what seemed an incredibly high speed and it took a long time to slow down.

So there I was at 4060m and my sea-level-living body was not happy.

Who is most affected?

You don’t need to be climbing a mountain to experience altitude sickness. Altitude sickness is by its nature a very individual thing and this is an important point. Some people feel far less affected than others. During my time in Latin America’s high-altitude cities and mountains and I have experienced trekking with people who barely feel it and those who are virtually debilitated by it. I am somewhere in-between but leaning towards the debilitated side. Altitude sickness has little to do with fitness, weight, age or lifestyle – it strikes in what appears to be an entirely random fashion. Add that to the fact that just because you felt it on one trip you may not feel it on the next and you’ve got yourself a curve ball effect. The only thing we know for sure is that good acclimatisation is essential.

Walking off the plane and through the airport, I felt very strange, weak, heavy and tired. At first, though these symptoms can easily be confused with jet lag, especially after a night flight. A quick taxi ride and then an exhilarating cable car ride brought us down to a more respectable 3600m in the downtown area where I was deposited in my hotel to sleep for a few hours before starting work. As I lay down to sleep I could feel my heart pounding in my chest. Heading out later into the chaotic streets of La Paz every breath felt laboured.

Over the next few days, I had many meetings and this required hot footing it around La Paz’s maze of hilly streets. Walking uphill felt as if I was carrying at least a 20kg backpack. My head veered between a haze and a blinding headache. My sleep was restless and my dreams vivid but confused. My mouth was so dry it felt like the world’s worse hangover. As you can imagine none of these contributed to the professional demeanour I was hoping to conjure. I arrived at each meeting unable to speak with breathlessness, gulping water down and running for the nearest toilet.

What is altitude sickness?

Altitude sickness, or AMS (Acute Mountain Sickness), occurs at altitudes of over 2500m, although generally symptoms are felt at over 3000m. Symptoms occur due to the decrease in atmospheric pressure which means the body is able to take in less oxygen. At 3,600 metres (12,000 feet) there are roughly 40% fewer oxygen molecules per breath so the body must adjust to having less oxygen. However what really causes symptoms of AMS is when you ascend too high too quickly, for example when flying. If the body is given enough time, it can to adjust to the decreased oxygen at a specific altitude which is known as acclimatisation. The most important basic rule for climbers, trekkers and mountaineers is, therefore, to ascend slowly. Acclimatisation takes from 1-3 days generally but is necessary for each increase in altitude. Mild AMS, which is what I experienced in La Paz, is very common. Acute AMS takes 2 forms and can be fatal in rare cases. 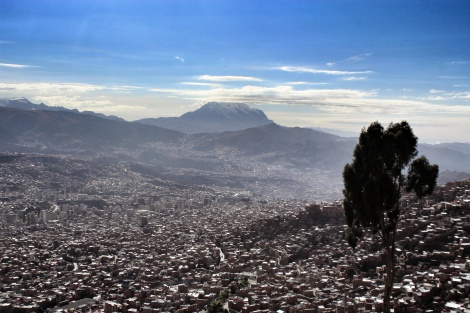 The urban sprawl of La Paz

What can you do about it?

Descend. Descent to lower altitude is really the only cure for moderate or acute AMS. If you are ascending a mountain and begin to feel confused, dizzy, nauseous, breathless at rest, have heart palpitations or begin to cough phlegm you must descend immediately.

Coca Leaf Tea. Coca tea’s mild stimulating effect aids with the symptoms of altitude sickness. The Coca plant is native to western Latin America and is famous throughout the world on account of its psychoactive alkaloid which when extracted and processed chemically becomes the base of cocaine. Don’t panic, its legal! The amount of alkaloid present in the raw coca leaf is very small; actually, it’s minute in comparison with the amount of alkaloid contained in a line of cocaine. Drinking the tea therefore does not produce any type of narcotic high, although the growing of Coca in Bolivia has been controversial for a long time. Indigenous president Evo Morales has faced a long running battle with the US who would like to see it eradicated but the Coca Leaf is a large part of the local economy, millions of rural families survive by growing and trading it for medicinal and traditional use. Chewed by Andean workers for centuries, coca leaves are now synonymous with Bolivian culture.

Sorojchi pills. Sorojchi (Spanish for altitude sickness) pills are Bolivian made, sold in every pharmacy, in La Paz and pretty much all high altitude tourist spots in Latin America. They contain aspirin, caffeine and a type of paracetamol so they are only treating the symptoms rather than the cause, but they did work for me.

Sleep. Altitude can really mess with your sleep as the decreased oxygen supply means your breathing is shallower. Paracetamol or natural remedies such as melatonin can help you stop continually waking. People do also say sleeping on your left side helps increase oxygen intake.

So what else can you do when catapulting your body from low to high altitude in a plane is the only option?

Acclimatisation is the key. Give yourself 1-2 days at high altitude before doing any activities. Avoid increasing your sleeping altitude by more than 300m per night without acclimatising first

Keep well hydrated. Your digestive system works more slowly at altitude and water helps it along, as does a high fibre diet. If you are flying in drink lots and eat light meals on the plane

Take it easy for the first 24 hours. Your body needs rest in order to produce more red blood cells which are needed to carry oxygen around the body. Walk slowly and take short breaks often.

Exercise before setting off – this can help increase your lung capacity

Sleep low, this mainly applies to trekking but for example, in La Paz, the Zona Sur is around 500m below the Downtown area and this can help if you are susceptible to AMS

Try not to fly into to high altitude, overland transport or walking is best!

About Not Just Travel

Travel is going from one place to another. The right holiday isn’t just travel. It’s more than that. It’s a well-earned break. An incredible experience. An unforgettable memory.

At Not Just Travel, we know how much the right holiday means – so we give people the easiest, most effective way to find it.

Founded in 2001, we now work with over 350 Travel Consultants across the UK. They’re experts who are fanatical about travel and our network means that, no matter how fast we grow, you’ll always get an intimate, personal level of service.

Of course, we also bring the benefits of being part of the biggest independent buying group in the UK – including over £2 million in daily buying power so we can secure fantastic offers on ABTA / ATOL protected holidays our consultants can choose from at any one time.

It’s no wonder we’re one of the country’s fastest-growing travel companies and provider of programmes for companies like Sainsbury’s, AstraZenecha, LV Insurance and NHS Trusts across the UK.

With Caroline Joyner and Not Just Travel you’re in good hands!