Whilst visiting the Galapagos for work trip in late 2014 I discovered some astounding plans for development.

As I sit on the white sand beach in looking out at the waves, I realise that I am the only person here. The only sounds are the crashing waves, and the omnipresent bark of the Galápagos sea lions. My eye is drawn to something dark in the shallow waves of the shoreline. I watch transfixed as a huge marine iguana crawls out of the water onto the beach. He is a remarkable looking creature with dragon like features: a line of sharp spines along his back, black scaly skin and a long tail bringing his length to about one metre. He waddles back into the water and gracefully swishes his tail as he swims off to sit on a lava rock nearby. There I watch him sit, staring at nothing into the distance for the next 2 hours. Such is the life of a Galàpagos marine iguana, the world’s only sea-going lizard.

The Galàpagos Islands, an archipelago of 14 islands 1000km off the coast of Ecuador, is described by UNESCO as “a living museum and showcase of evolution”, being home to more than 100 species found no where else on earth. Punta Carola beach is located on San Cristóbal Island, only a few hundred metres away from the island’s main town of Puerto Baquerizo Moreno. Affectionately known as “Cristóbal Town”, the political seat of the Galápagos often referred to as “The capital of paradise”.

Back in 2005 I first landed in San Cristóbal as a naive volunteer. Just like the other 145,000 or so visitors who travelled to the archipelago that year, the focus of my motivation being the possibility of getting close to some of it’s famously amiable species. However the experience which followed took me entirely by surprise. Whilst the wildlife provided copious once in a lifetime moments, it was the people of the island of San Cristóbal who left the most lasting impression and have led me back here.

For most, the mere mention of the Galápagos conjures up images of giant tortoises lumbering across volcanic landscape and various other species cavorting lovingly with tourists on deserted beaches. It’s thus a surprise to many to learn that five of these islands are also inhabited by a soaring human population; government workers, fisherman, tour operators, teachers, refugees from the mainland, dreamers and scientists who all call the Galápagos home. 25,000 of them. Living with a family and teaching English gave me a unique insight how life on an island 1000km from the mainland unfolds.

Back in 2006 the Galápagos was put on the UNESCO danger list with major concerns being the increasing local population as well as tourist numbers. Whilst the numbers of cruise tourists remained steady, in the early 2000’s an entirely new breed of tourist arrived in Galápagos: the independent traveller. Until this point the opportunity to see the famous Galápagos wildlife had been limited to those with high spending capacity, but now a new type of tourism was enabling budget tourists and even backpackers to muscle in – so called ‘land based cruising’. Land based cruises are operated by small, locally owned tour operators and refer to boat tours around the various islands which involve staying at budget hotels. As this sector established itself the number of operators & guesthouses boomed and has now brought with it a 30% increase in visitors. Despite this figure, development has remained low key; the town retains its “small town” vibe where local life co-exists sleepily alongside tourism.

The bark of the Galápagos Sea Lion was, and still is, as ubiquitous as the sound of the waves. Colonies of these smelly, though magnificent beasts laze around on the town promenade, occasionally shuffling down to the water and treating the tourists to a spectacular aquatic display. The birds fish, the shop owners sit around on the street chatting, and the government workers wander unhurriedly from office to office. Island life ticks by oblivious to events in the rest of the world – on San Cristòbal the most important thing is when the next supply boat will be arriving.

It is often noted that whilst independent visitors to San Cristóbal are busy spending their hard earned cash in local shops, restaurants and guesthouses, the traditional cruise tourist is mostly contributing to the wealth of large foreign owned tour companies, spending very little on any of the islands themselves.

Conservationists, however, have long held concerns about the local population & tourism growth which of course has brought with it increased infrastructure and demands for public services. New invasive species and bacteria which are inevitable to the above could be fatal to the fragile environment here. A local conservationist and eco-tour business owner told me “it is important to remember that although there are many amazing places in this world, the Galápagos is completely unique – endemic species and indeed the whole ecosystem could so easily be wiped out by foreign bacteria”.

Currently only 3% of the land in the Galápagos is not part of the Galápagos National Park and hence protected from development. The remaining 97% of the land is the territory of those fascinating creatures who call it home. Punta Carola, the very beach where I am sitting, has now inadvertently found itself at the centre of a large scale protest, which for the first time is directed right at the Ecuadorian Government. It sits on the northern reaches of town in the “Reduced Impact Zone” – just between the unrestricted area and at the boundary of the park proper. This is supposedly property “held for the eco-tourism and use of residents”, and development is limited to trails and sign posting. The idea of building a hotel here would previously have been unthinkable and even obscene. That is until now. 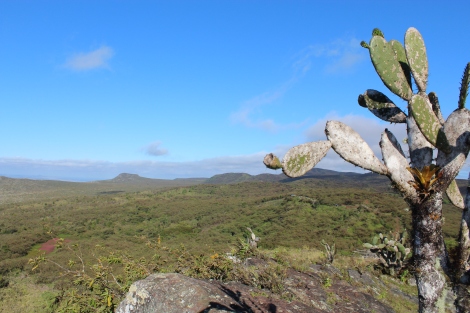 Last year the local population were horrified to discover plans by a consortium to build 174 room luxury resort in this very bay. It seemed that the nesting marine iguanas, blue footed boobies, sea turtles and lazing sea-lions of Punta Carola, would be no longer. In July 2013 the government established a moratorium on development of “new tourism infrastructure or expansion of existing facilities”. However in mid 2014 that the moratorium was partially raised to allow 20 tourist development projects, reportedly totalling more than 500 hotel rooms, 60% of these are planned for San Cristóbal.

The final straw came when it became clear that most of the 20 projects were to be either entirely or majority owned by non residents and that the Ecuadorian Ministry for Tourism was actively advertising for international investors on its website. Until then the special Galápagos law, known as ‘LOREG’, stated that businesses must be majority owned and managed by residents only. This law has now been changed to state that local ownership is “preferred” rather than “essential, leading protesters to accuse the government of “selling the Galápagos to the highest bidders”. Many other aspects of the revised law are also set to change the lives of these islanders, such as forcing local young people to compete with continental graduates for jobs as tour guides – leaving a bleak outlook for local children. The already humid temperature in Cristóbal town reached boiling point and thousands of residents took to the streets to protest, clashing with police who used tear gas to disperse them.

The government responded to protests by refining the law to state that no new hotel could be larger than 35 rooms, but far from calming the furor, many feel that projects will simply be split to get around this restriction. Sean Keegan & and his Galápagos born wife are the owners of a small tour agency in Cristóbal town and have launched a facebook page called “SOS Galápagos”. Their mission, described as “Helping to protect the Islands from opportunists and crass commercial exploitation”, has generated over 3300 likes. “People here are aware of the fragility of the islands and their co-dependence with them. They are generally concerned that the government, in its desperation to make quick money is selling the Galápagos, the environment and their futures” says Mr Keegan.

So what would the impact of introducing high-end tourism to this small island in the pacific actually be? Veliz has estimated that the new projects being talked about could result in an increase of 600-800 visitors per day. Environmentally & economically, islanders fear a meltdown, describing the new policy as “opening the floodgates of commercialisation”. San Cristóbal has very little fresh water and barely enough for the current population, not to mention a huge sewerage problem. High end spas and golf courses would surely be the antithesis of the long term sustainable growth which both the residents and conservationists are desperate to see. 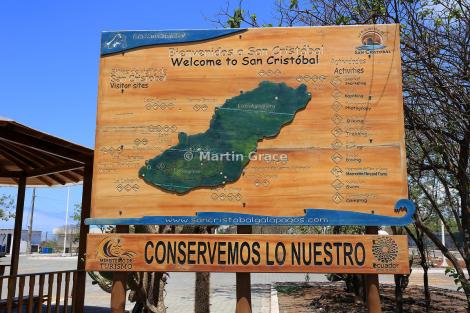 In addition the damage to the small business owner here would be irrevocable. Currently the island’s accommodation generally operates at 50% capacity. The effect of bringing in yet more hotel beds would cripple local family owned guesthouses and tour agencies, which now account for a large percentage of the population’s income.

Nelly and Javier Agama and their 4 children are a family at the beating heart of Cristóbal Town. Born and raised here, Nelly was one of the first to open up her house as a Bed & Breakfast in 2001. Mention Nelly virtually anywhere in town and you will be hard pressed to find anyone who does not know the family. They support several local projects as well as running the guesthouse and a pharmacy. Staying at Nelly’s feels much like being tucked into the folds of a Galápagos family, yet this is exactly the type of experience which may die if foreign investors flood the island with five star accommodation. “Local tourism is only a small slice of the cake in the Galápagos”, explains Javier, “but if entry fees are significantly increased and luxury hotels built this slice of the cake will die. We want slow sustainable growth, not massive hotels”.

Back at Punta Carola, a female sea lion suckles her pup, nearby 2 older pups are engaged in an energetic game of rough and tumble. They lollop down to the water’s edge and as their bodies hit the water they become a picture of grace, diving and somersaulting like synchronized swimmers. They are completely un-bemused by the presence of a snorkeller. Next, Mummy sea lion decides the contents of my bag are too fascinating to resist. She waddles over and tries to pick my bag up in her mouth. Although I have had many experiences of this type before here, still I marvel that I could be lucky enough to be in this moment.

As I sit in my own tiny piece of paradise, I ponder what sights will await me if I am lucky enough to return in 5 years time: a large luxury spa hotel with golf course or deserted sands, presumptuous sea-lions and swooping boobies? Only time will tell, but one thing is for sure the “Galapaguenos” are not giving up their future without a fight.